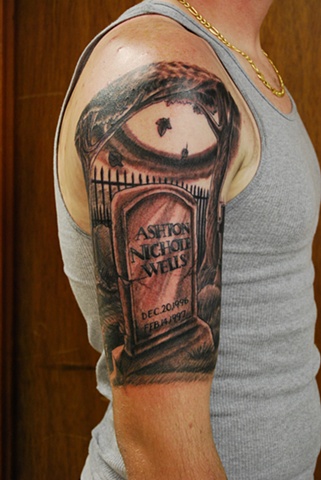 The reason for this tattoo was because my sister Ashton Nichole Wells who was born on December 20 1996 passed away on February 14 1997. She passed from Sudden Infant Death Syndrome (SIDS). For many years I had been contemplating a good design for the tattoo. At first i wanted it to be a picture of her and I because there is only one of us. Then I thought more towards a graveyard scene with her tombstone in it. As i thought about it like most people would think a graveyard is a gloomy place nothing that really has good in it. When I came to Dave with the idea I told him i wanted the trees to be lively and the moonlight to be shining down upon her stone. Make the scene better to look at something more in rememberance for her not so much gloom because she did pass. When Dave showed me the sketch I immediately fell in love with it and said lets go put that on my arm and now because of him I have an awesome tattoo that I can remember her by for the rest of my life and explain the story to anyone who wants to know. Thank you Dave I appreciate the work you did i truly couldn't be happier.